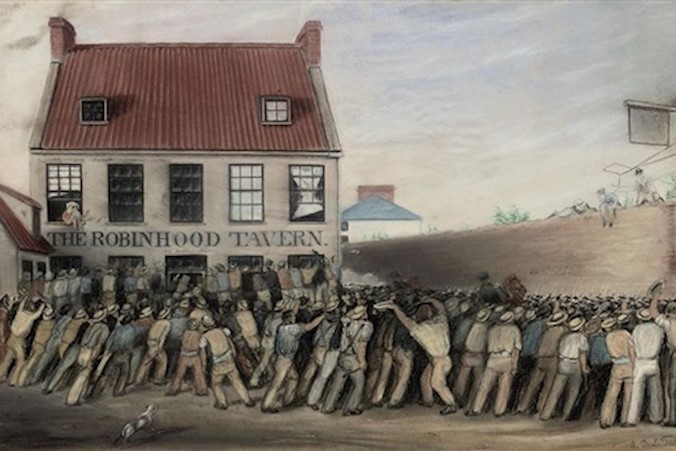 Did you know that bread was the cause of one of Jersey largest civil uprisings? In May 1847, workers in Jersey took to the streets to protest over the high price of bread, even though the Island had successfully fought against the imposition of the UK Corn Laws. But still prices rose, leading the States to open its own bakery and sell discounted bread to the poor.

But on 15 May, the Constable of St Helier made a statement to the press announcing that the States would soon stop selling cheap bread as work was now plentiful. Parishioners would, instead, be asked to support the workers through a subscription.

But the workers were not satisfied and the next day about 1,000 of them marched into the Royal Square to demand action. After their leader, Jean Picot, was promptly arrested and sentenced to eight days’ solitary confinement, the crowd marched to the Town Mill and burst in to take bags of flour and grain. They left with two wagon loads while many men walked away with as much as they could carry.

By this time, the Island Garrison had been mobilised and the Riot Act was read out in the Royal Square. The army caught up with the workers at Robin Hood Corner and after a short engagement the two wagons were captured and the crowd dispersed. Although they formed again in the Royal Square later in the afternoon, the impetus had been lost and there were no more clashes.

The next day, the quarrymen of Mont Malo started to march to town, again calling for a fall in the price of bread, to 2d per pound – the existing market rate being 3d per pound. Troops were once more mobilised and the Riot Act read.

The authorities were clearly rattled by these acts of uprising. Extra police constables were recruited but the Constable of St Helier also set up a fund for extra poor relief and, importantly, it was agreed that bread would be sold for 2d per pound. It was a victory for the Island’s working class and an illustration of just how important bread was – and is – to the people of Jersey.