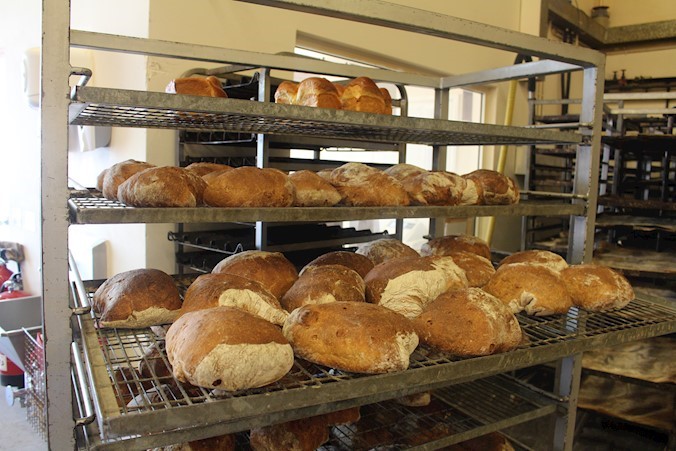 The UK sliced loaf represents a massive 80% of the British market for bread and a further 18% is made up of factory produced part-baked and other bakery products, all designed to have a long shelf life. It gives the consumer the efficiency of mass production - a huge saving on labour costs - and is designed to stay soft (although some would say soggy) for a week or longer, depending on the amount of preservatives included.
Britain has the cheapest bread in the English-speaking Western World - many Third World countries have more expensive bread then the UK's. British supermarkets are said to have engaged in "predatory" pricing policies, where some staple foods like bread and milk are permanently sold at less than cost or at an unrealistically low profit margin. This practice is illegal in countries which believe it unfairly distorts competitive market places. Fortunately, Jersey supermarkets have widely supported local bakeries as a choice for local consumers. We will always be a bit more expensive.
In France, some 60% of bread is still made by small craft bakers. Bread is valued for its quality, taste and texture. The boulangerie is almost part of the community - many folk will shop twice a day for a fresh loaf, not twice a week. Traditional France has bread at the centre of the shared family meal time; it is symbolically entrenched in its culture, language and religion. For example the French "copain" is the informal word for friend and derives from someone to share your bread with.
Surveys show that 98% of French women believe that bread is an essential part of their family's healthy diet. It is estimated that more than 20% of British people now believe they have an intolerance to gluten (the protein in cereals). There is a serious medical condition affecting perhaps 2% of the population, who are made very ill by wheat protein. But I think the growing number of people who find English bread leaves them feeling bloated is because factory-made bread is designed to remain soft for an unnaturally long time. To me, bad UK factory bread feels indigestible, almost like eating putty. Of course, it is a matter of personal preference and there is no doubt that mechanising bread brings huge cost savings.
Jersey sits geographically and culturally somewhere between the UK and mainland Europe. As a Jersey-based craft bakery, we are very proud of our craft and proud to be a bit different from England (as much as we love them all!). The world changes, but we think the extra time and effort it takes to make (and buy) a fresh crusty loaf is well worth the difference.
David Dodge, Owner, Vienna Bakery.